We woke up realizing that it was our last full day in China.  To be honest, it was excitement mixed with a little sadness.  We were so excited to get home to our family, friends and life, but our time in China had been filled with memorable moments and people that we hesitated to leave behind.
We had the option of going with our group to one of two zoos.  I admit it would have been cool to see some pandas while in China, but to be honest I have seen Pandas before.  They just lay there. Remember Ling Ling at the National Zoo in DC?  (Even our guide Jason said they are pretty high maintenance and won’t come out when its hot.) This may be way too pragmatic, but my thought was that we can visit 3 or 4 zoos at home by driving just a few hours.  I can watch a bear lay in the shade at home! Our newest family addition was not going to remember it anyway.  I wanted to experience something different and unique to the area.
So we headed out to Shamian Island.  This is a special little island just 15 minutes from where we were staying.  Up until just a few years ago, it was the home to most of the consulates in Guangzhou. It has the look and feel of a tropical tourist destination. It boasts quiet tree lined streets with quaint local shops and a totally Americanized cafe named Lucy’s.  The buildings and street sculptures honor the international history that must have taken place there over the last century.  To be honest, after seeing it, I was sad that our adoption experience didn’t take place on the island as it had for so many other families just a few years before. It had way more ambience than the bustling metro location of where we stayed. 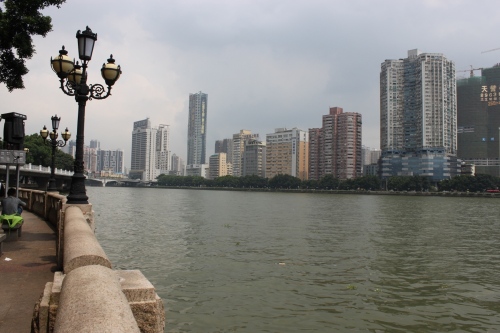 One of my main goals was to get a photo of Little Li in in the middle of a famous bronze sculpture which shows a violin   teacher and her students following behind.  There is a gap in the line and it is tradition for newly adopted children to fill the gap in the line and have their photo taken. 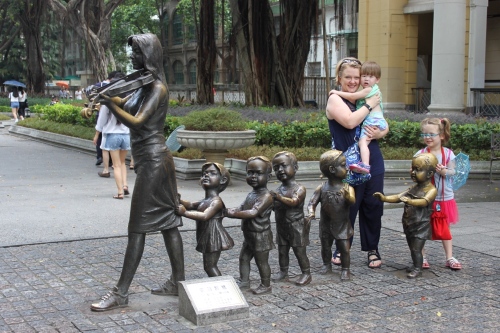 It was raining and Little Li wasn’t excited about the photo, so we snapped it quickly and moved on for a quick latte at Starbucks, where something interesting happened..
Before I go any further, I would like to state for the record that my coffee of choice in Terre Haute is Rex coffee.  Its outstanding.  So is the atmosphere and food of our Clabber Girl Bakeshop.  If you haven’t tried it, you should.  The only negative is that we don’t yet have any international locations.  I have to tell you that after being away from the states for two weeks, a Starbucks sign means good old fashioned American coffee and is like a beacon in the desert! I have also spent some time in McDonalds and KFC these last few weeks… but I digress.
When I walked into this quaint Caribbean-like Starbucks, a girl walked up to me and asked if i would like a free latte.  (Which is my drink of choice.) I said sure! She told me they would pay for it if they could film the barista making it for me and handing it to me.  I said of course.  (Those of you that know me well, know that I could never pass up an offer like that.  The price was right!) I then found out it was for an international promotion for Starbucks and the latte.  I may have had my 15 seconds of international fame.  Unfortunately, it probably won’t be in English and will never be seen by anyone closer than 7000 miles from home.  Oh well! 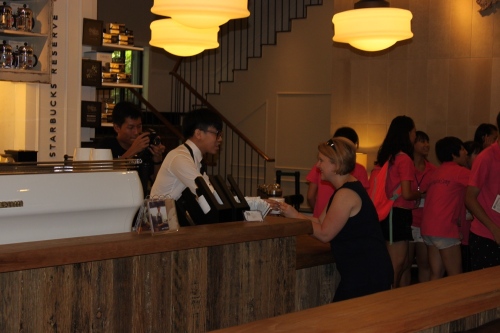 My 15 seconds of fame

The afternoon sun was pretty hot so we walked and shopped for a bit, had lunch at Lucy’s and then caught a cab back to our hotel.  (Which was kind of a downer after walking through the White Swan Hotel on the island.) 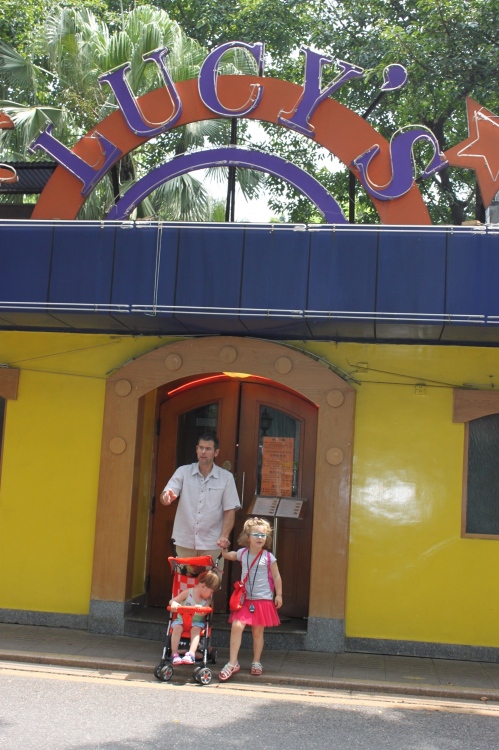 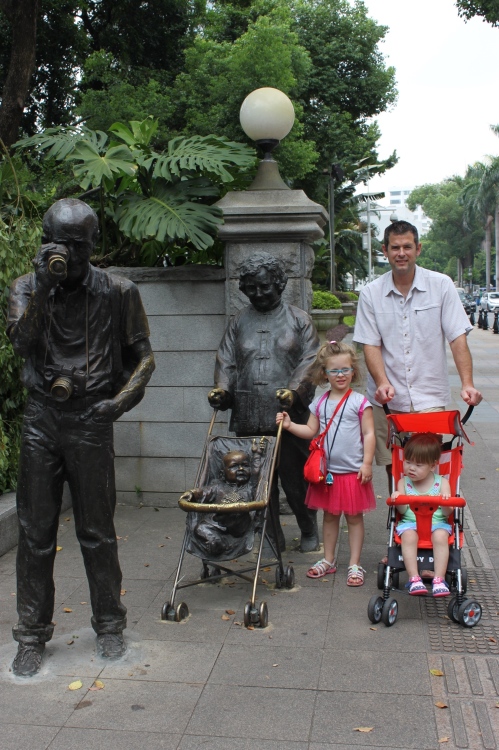 The evening was filled with the daunting task of packing everything back up (our hotel room had become our home) and preparing our newly completed family for the marathon plane ride home.
We met with our group briefly downstairs to receive our child’s visa and the people who had become our family for the last few weeks, were suddenly gone.  It was kind of sad.  We were excited to go home, yet this was the group  with which we had the adoption gauntlet .  It was a special bond. I felt like it was hurried process of saying goodbye in the hallway and then it was over.  I needed more formalized closure!  The great thing is that our children have a special bond in that they began their new lives together.  (Some of them share orphanage experiences.) My hope is that we will be able to keep in touch and watch as the other children begin to flourish in their new families. (Our group’s families are located all over the USA.) That is the beauty of the digital age! 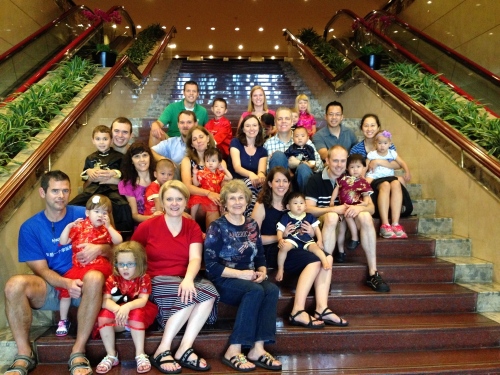 An now it was time to move on and go home.
Your Friend,
Meredith
LLI
Edited with BlogPad Pro