Mimi and a Luoyang Little One

I’ve waited to write more about the orphanage, quite frankly, because I needed time to process it all before taking to the keyboard. Our daughter lived the first 2.5 years of her life in the care of the people of Luoyang.  We are grateful that she appears to have been healthy (with some minor issues) and grown normally during her time there.  We could tell from our limited interaction with the staff, that the people who work there do care about the pint-sized bundles of energy in their charge.

You may be surprised to know that visiting the orphanage of a child you have adopted from China is not always something that can or does happen for each adoptive family.  There are many factors such as distance, scheduling, personnel and paperwork that may throw a wrench into a family’s plan to visit their child’s orphanage. Furthermore, not all families want to make the trip.  When you have had a child for only a few days, there may be health or attachment issues that a long trip in a car or train wouldn’t help.  In addition to logistic problems there is an emotional risk of going back and taking your child with you.  Some children are very attached to their care givers and going back to their home and interacting with their friends and everything familiar, only to be taken away, can be traumatic.  They lose everything all over again.  It can also be hard for newly adoptive parents to watch as their children attach and cling to their former caregivers, wondering if they will want to come back into the arms of this stranger that now wants to be called ‘Mama.’  The truth is you don’t know how it will go until you get there.  You have to be willing to take the risk and deal with whatever happens…and we were.

I wanted to capture as much as we could in our time in Luoyang for the sake of our daughter.  I wanted to close the loop on so many open questions that called for more than second-hand knowledge from our agency. Only visiting in person could satisfy those questions. (Mimi felt the same way, so she joined us even though I was afraid her tender teacher-heart might not survive saying goodbye to the little ones that entered her life that day.)  Someday Little Li will want to know more and we will be able to at least share with her some basic first-hand knowledge of the first place she called home.

Our visit was the last stop of a marathon day that had started with the finalization of the adoption at one location, then a brief interaction with a notary official in another location and then a 2.5 hour drive to do the paperwork for her passport. (See my post on day 6.  )  Our visit to the orphanage happened at the end of an extremely long day and we were hot, tired and determined.  (Thankfully so was the other family adopting from the same facility. We were in this together!)  The clock soon ticked past the 5:00 pm mark, but the orphanage director was gracious enough to stay late in order for us to visit. What I saw there surprised me. 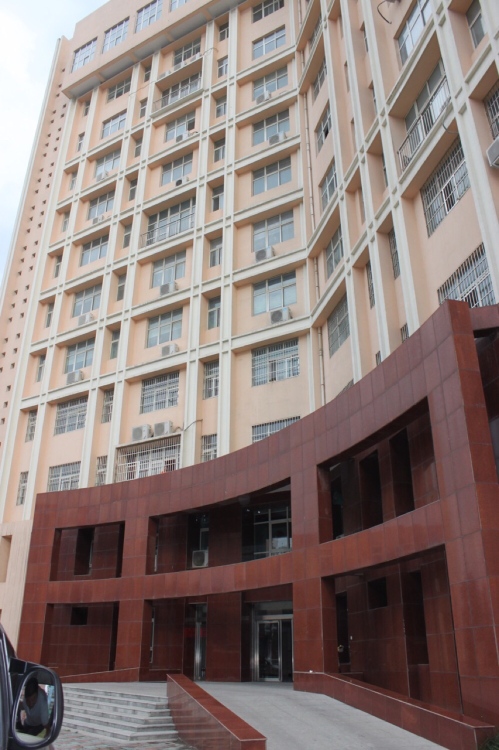 The exterior of the orphanage

The building is over 10 stories tall and towered much higher than I expected.  It was large.  Very large.  It would have to be because it houses over 700 children.  That’s right. 700+ children wake up and go to sleep in a mass community of young citizens that band together to form their own family.  Keep in mind this was just ONE orphanage in ONE city!

We were greeted outside by care givers on their way home.  They were excited to see both girls and obviously wanted to say goodbye.  We then were ushered into a first floor room that was our daughter’s actual room.  There were 14 cribs (probably twice the size of an American crib), 2 children in each crib and 2 caregivers.  We were told that the children only spend a few hours each day out of their crib.  At first you are enraged by the thought!  But then you consider the reality.  If you had to feed, change, bathe and play with 28 children under the age of three in one eight hour shift, that is no easy task.  (Much less trying to the emotional needs of the demanding toddler temperament!) Is there a better way to care for these kids?  Maybe, but there is no ideal solution and always a lack of people, time and money. (Some of the other orphanages have foster programs, but not every orphanage have  the resources to coordinate such a program.) Its just reality, like it or not. 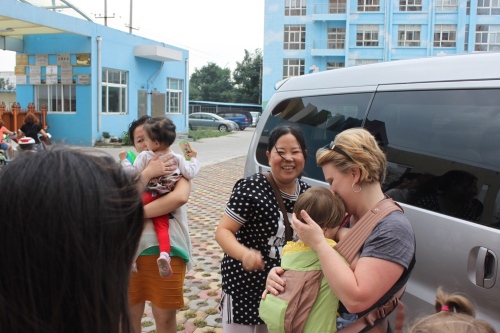 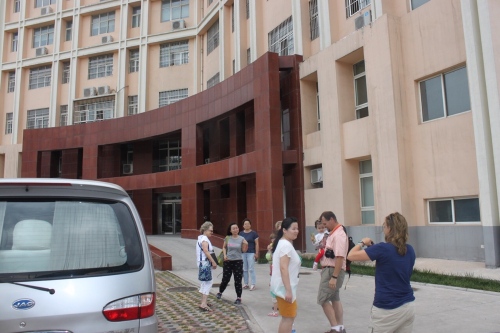 The children were already in their cribs when we arrived a little after 5:00 pm and immediately started calling our daughter’s name when we walked into the room. I tried to get her out of the baby carrier in order to  allow her to interact, but she wanted no part of it! (It was as if she was saying ‘I thought we had a deal and I was done with this, Mom! Don’t let go.’) Little arms began reaching for the grown-ups in order to be held and get attention for just a moment.  While my arms were full, Mimi couldn’t resist the sweetness of the little hands so desperately in need of attention.  She was drawn in by a small, waif-like girl that melted immediately into her arms . This little girl was grateful for gentle hands, even if they held her only for a moment.  In those brief minutes, I wanted to load our van up with these beautiful munchkins and high tail it out of dodge! Irrational I know, but it left me wanting to do more.  Looking back, it may have been good that Mom held this little angel instead of me.  When we got back home and I opened up the photos from the camera I had sent ahead to the orphanage, this little girl was in most of the photos and the video.  I think she may have been one of our daughter’s close playmates.  She will forever be in my prayers.  I pray that God will give her the same  opportunity for a new life as our daughter and the other children in our group. (She is pictured above with Mimi.) It was hard to leave her behind.

Overall, the facility and the few parts we saw appeared organized and clean.  (It was far better than the hospital we visited earlier in the day!) The children seemed to be adjusted and the caregivers engaged.  It was better than I had anticipated to be truthful.  Good. Yes.  Great. No.  As long as there are children in orphanages, the situation will not be great or anything less than ideal.  It is not the the way God intended for children to be raised.  It made me keenly aware and thankful for the other families of the same mindset who had joined us in this international adventure.  9 children started over that week with new families and new homes.  They are orphans no more! The week also made my heart ache a little more for the little ones still there.  I have touched their hands and heard their cries.   It leaves an ache in your heart when you think about the lives of excess we live in the USA. I  could rant a little here, but instead I will move on and revisit that later!

We explored a few other areas of the facility with the director and looked at her playroom as well as the back courtyard.  The director answered a few more questions and then it was time to leave.  Traffic would be heavy, so the driver didn’t want to stop for dinner.  (I was starving!)  So we stopped at a gas station that would make a 7-11 look classy and began our journey home.  (Again, visit my previous post for an entertaining story..) We will forever have a special bond with the other family than ran the Luoyang gauntlet with us that day.

It was physically, mentally and emotionally exhausting.  But I am glad we went and looked with our own eyes.  When she is old enough to have questions, we will talk more about it.

For now I will hold her in my arms and the other little ones in my heart.