On day 12 we celebrated one week since Gotcha Day.  Our entire group had to load back onto the bus in order to get the required physical exams before our children could be approved for US visas to enter the country. Think about taking a child to their first doctor appointment, but not being able to speak in  her language to console her.  Think about the stress and trauma, now multiply it by nine.  Nine because there were nine children in our group who had to be examined at three stations and several that had to have blood drawn for TB tests.

The night before, Little Li had been fussy and was running a slight fever (which I knew wouldn’t be good for the day!)  I gave her a little tylenol before bed and made sure she had plenty of liquids and prayed the fever would go down.  Thankfully she acted fine the next morning.  It would likely have delayed us, because our guide on the bus the next day asked  if anyone had a fever before leaving.  Once again, whew!

We started on the first floor in order to take visa photos.  If you have been following the blog, you know that the passport photo didn’t go well.  We were holding our breath, because it could be a long morning for all the families involved if any of the little ones refused to cooperate.  When it was our turn I stepped up and set her on the chair.  She sat there and they took her picture.  It took less than a minute.  No muss, no fuss! Double whew!

The medical office was directly across from the consulate and staffed by personnel approved by the American Government.  The floor was packed with people waiting, but we were ushered to a special wing of the floor marked off especially for adoptive families. 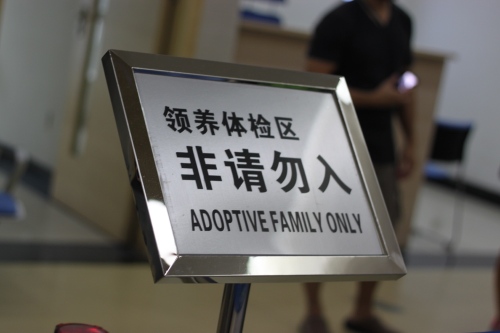 Mickey mouse was imprinted on the floor and the lighting was literally shaped like clouds to try to create a welcoming atmosphere.  (As welcoming as a doctors visit can be, anyway.)  Families rotated in to the following stations:  #1 -height, weight and temperature #2 – Eyes, Nose, Throat #3 – General Physical Exam.  We got through the first few stations pretty quick.  The physical exam seemed to go fine, but then the doctor spoke to us and led us back to station 2 to sit down again.  He had the ENT look at her again.  He then scribbled out some of his previous writing and changed her record.  We asked our guide to go back to with us to speak to them so we could understand what was happening.  (Our guide Jason ROCKS!) It turns out that they were documenting her eyesight which appears to have some nystagmus.

Then because she is over the age of two, a blood draw for TB was required.  They took her out of my arms and wouldn’t let us go in with her. (Ugh..)  The only bright spot here was at least we didn’t have to be part of the drama of holding her down and got to be the arms of safe haven when she came out.  She actually reached for me!  That in itself was a victory!

We opted out of the group activity for the evening and spent the time back at the hotel resting.  Even though Jason had warned us about slow service, we ventured into a very large restaurant called the Food Shops with English menus.  We were seated quickly.  Then waited. And waited. And waited. (Now with two very hungry girls.) Hubby, also known as Mr. Patience (not) got tired of waiting and had us get up. We left and went to the restaurant where we eat breakfast every morning. Our waitress understood almost no english, but we finally got an order placed.  Mimi ordered a club sandwich with no lettuce, mayo or tomato (in order to avoid tummy troubles associated with any raw vegetables washed in the water here.)  In essence, it was a turkey sandwich.  The manager came out (sure that our non-english speaking waitress had gotten it wrong) to confirm the order.  She gave Mom a look I will never forget!  As she walked away, Mom said ‘You think I could ask her back in order to get a little mustard?’  The look on my tired face must have said it all.  She laughed and said ‘Never mind.’

We finished our meal and headed back to our room to call it a day.he has begun to open up to all of us, including Mimi.  For days she has cried every time Mom has gotten close.  (She is terrified of strangers.) On Day 12, she actually let Mom get on her other side and hold both our hands to walk down the hall.  What amazing progress in just a week.  I continue to be amazed at her resilience and adaptability.  So excited to see what the coming days will bring. Thanks for sticking with us.